Don't get terrified — buckle up

Ukraine suffers from one of the worst road traffic accident rates among European countries.

In Ukraine in 2020, 3,541 people died, while another 31,974 got injured in traffic collisions. At least 850 of them people in Ukraine could have survived under one important condition: if wearing seatbelts was a habit for everyone.

Therefore, the European Union Advisory Mission (EUAM), together with the Patrol Police of Ukraine, hired us to launch a public information campaign in five regions with the highest rate of car collisions. Its aim was to increase awareness of the risk of fatalities and injuries in road traffic accidents stemming from the non-use of seatbelts and promote buckling-up among drivers and passengers.

In a baseline research, we discovered that the majority of Ukrainians acknowledged the importance of a seatbelt for their safety in a car. However, the data on the seatbelt usage was far less appealing. The worst setup was with rear seat passengers: 3 out of 4 did not buckle up in the rear seats. Many of them considered seatbelts optional because they felt safe in the backseat of a car.

That is why we decided to focus our campaign on seatbelt usage in the backseat of a car. And explain to both drivers and passengers that the backseat is also dangerous territory.

We knew that people close themselves to an overly realistic portrayal of dangers, going into "this will not happen to me" mode. So, we based our storytelling on an entertaining horror story. We used four typical traffic collisions – head-on, side, flipped, and rear-end car crashes – and the possible consequentces of these accidents for an unbuckled passenger. Next, we compared collisions to monsters from horror films to keep the minds of our audience open to such threats.

We created five videos about the possible consequences of different types of collisions. In the same style, we created comic books for kids.

As a part of our campaign, police officers visited 390 schools, where they conducted themed lessons and distributed comic books to 24,000 students. Patrol police also facilitated maximum immersion into the situation of a collision, using collision simulations, and promoting buckling up to children and adults at campaign events at public places.

We made (un)Buckled lives art installation, symbolising the many lives we can save every year if everyone makes buckling up their habit. It consisted of 850 properly used seatbelts, which equaleds the number of people who could have survived collisions in 2020 thanks to them.

We also engaged private sector partners, including the leading online ride-hailing service and big gas station chains. They played our videos as well as produced and distributed campaign posters and leaflets at their own expense. This way, we reached 600,000 drivers and passengers in the campaign cities with no additional cost. 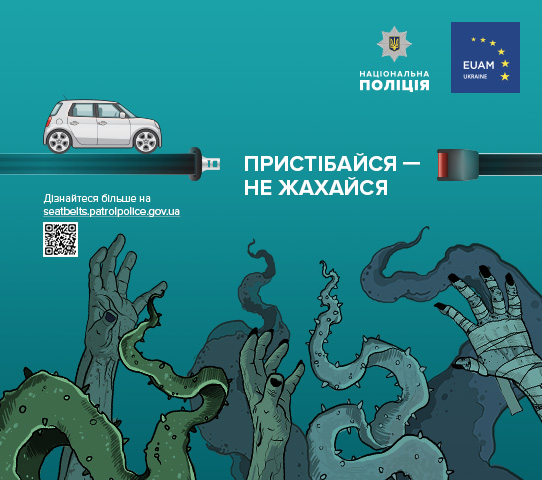 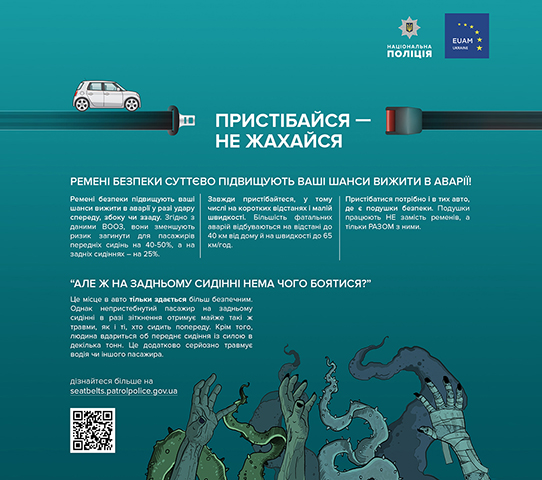 140+ pieces of coverage in national and regional media

Comprehensive activities helped us cover an estimated 79% of the target audience just in 2.5 months. The end-line research demonstrated that 72% of those who saw our materials reported a positive change in their attitude towards road safety. They began to buckle up at the backseat as well as recommend it to other car passengers. Just in 2.5 month we managed to convince Ukrainians that the back seat in a car was dangerous too and wearing a seatbelt there is a must.

The share of people who consider it safe to travel in the back seat without wearing a seatbelt decreased from 13.8 to 5.8%.

The share of people who consider buckling up in the back seat optional dropped to 3.1%, which is more than seven times!

Do you have a project?

A part of One Philosophy Group of Compani﻿es